Sei in: Home / The Humoral Tradition 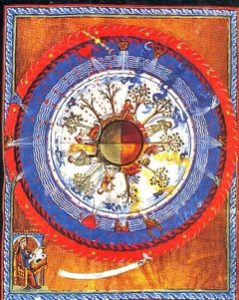 Humoral understanding, formulated by Galen, was central to the Greeks, Egyptians and Assyrians, and was the central philosophical and medical thought in the West until Descartes and later Harvey started a shift of consciousness. Human temperament, organized into Choleric, Sanguine, Phlegmatic and Melancholic – derived from an over- abundance of one of the humoral fluids. The energies of the humors were likewise reflected in the vast macro-microsystem; the four elements (fire, air, water and earth) the ages of man, the planets. All aspects of life echoed these same principles and reflected them back on each other. Hildegard von Bingen referred to these energies as “the fabric of the human body… they are diffused and active throughout the body… and at the same time they are spread throughout the world and work upon it.”

For the Elizabethans, humoral theory was still predominant and Shakespeare used that common knowledge to directly communicate character detail to his audience. His plays are filled with the imagery and delineation of those humors to offer us both explicit and implicit cues.